Not coincidentally, the sport of football naturally employs terms usually associated with war, such as “aerial attack,” “blitz,” and “trench warfare.” During World War II, the U. S. military and colleges joined forces, fielding competitive teams to prepare men for combat. The book highlights the Department of the Navy’s role in preserving the game and football’s impact on national morale and the war effort through their “Lend-Lease” to colleges of officer candidates, including All-America and professional players. It describes wartime college and military football throughout the globe and features a foreword by veteran ESPN college football commentator Beano Cook. It contains 81 photographs and illustrations; listings of college and military teams, records, scores, big games, and statistics; player and team profiles; and a glossary of period football terminology. 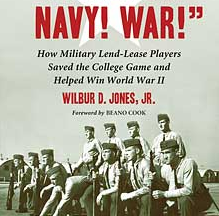