Forget That You Have Been Hitler Soldiers: A Youth’s Service to the Reich

Hermann O. Pfrengle’s remarkable, breathtaking memoir describes the unorthodox life and travails of an adolescent German boy on the war-scarred home front. As a member of the Jungvolk organization loosely associated with the Hitler Youth, he helped construct the Siegfried Line, worked in the war effort and civilian defense, and attended high school until it was bombed.

Advancing in Jungvolk leadership, at age 15 he and his unit were called into active paramilitary combat service in supply, courier, and Flak helper roles. He fought with the Wehrmacht from the Rhine River into Czechoslovakia, avoiding the fanatical SS as much as U.S. bullets. Taken prisoner by General George S. Patton?s forces two days before Germany?s surrender, he and his comrades were released after three weeks in an American POW camp in late May 1945 with this admonishment:

Finally the American officer showed up again and handed each of us a typed sheet of onion skin paper. The top of it read “CERTIFICATE OF DISCHARGE.” My eyes popped out, and my comrades could tell from the big grin on my face the good news, before I could open my mouth. I was stammering words of thanks but the officer cut me short with an impatient gesture of his hand. He instructed us about the general curfew from 6 p.m. to 6 a.m., and dismissed us with the admonition, “forget that you have been Hitler soldiers.”

By his age and seniority he became their leader for the arduous, passionate two-month sojourn to the Rhine to parents who had not heard from him in four months. His story, written with historian Wilbur D. Jones, Jr., is an unforgettable account of courage, ingenuity, and perseverance.

The narrative is supported by 29 photographs and illustrations. Maps illustrate the location of the Siegfried Line and his retreat route from the Rhine River into Czechoslovakia. He researched and drafted his own memoir from personal recollections, family records, publications, and documents. In assisting him, Jones drew out his memory to the maximum extent, and researched appropriate subjects such as the Hitler Youth and the campaign in Central Germany in the Spring of 1945. Then Jones edited his material. Pfrengle superbly supplements his remembrances with first-hand accounts he translated from numerous other German sources. He speaks and writes perfect English (did he utilize his knowledge of high school English in captivity?).

Be the first to review “Forget That You Have Been Hitler Soldiers: A Youth’s Service to the Reich” Cancel reply 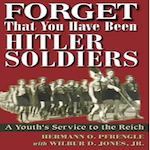 You're viewing: Forget That You Have Been Hitler Soldiers: A Youth’s Service to the Reich $24.95
Add to cart